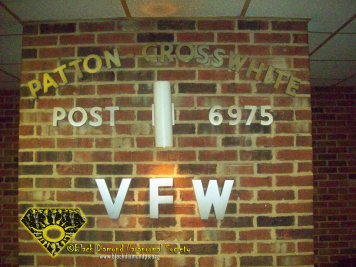 Listed below for each type of evidence.

On March 15, 2015 the BDPS team investigated Patton Crosswhite Post 6975 VFW located in Bristol, Tennessee. I would like to take this moment to thank Patton Crosswhite Post 6975 VFW, for giving us permission to investigate such a historical site. It was an honor and privilege for the BDPS team to have this opportunity to show our respects and pay homage to our brave men and women that wear the uniform and defend our county now as they have done for the past 230 years. We all at BDPS would like to thank all of our service men and women for their service and sacrifices for our country. We decided because of the size of the building that each team would investigate separate areas of the property simultaneously while one team would watch the camera monitors at our base within the building. We started our investigation around 8:00 p.m. with a walking tour of the post that was given by Tommy Porter. We started our set up around 9:00 p.m. We then proceeded to our investigation soon after dividing into teams. Team 1 consisted of Michele Crigger and Pat Belcher, Team 2 consisted of Robyn Dalton and David Belcher while I watched the camera monitors. We were assisted throughout the night during the investigation by Tommy Porter, Donna Tomblin and Mrs. Porter. Each team was placed to investigate different locations of the building, with team 1 investigating the second floor and surrounding rooms, and team 2 investigating the bar and lounge area on the first floor while I monitored our cameras back at base. Each team worked on a rotation changing their location about every 2 hours. We finished our investigation around 4:00 a.m. the following morning. This was a great experience and very helpful in our constant training.

EQUIPMENT USED AT THIS INVESTIGATION:

We placed (1) DVR (Digital Voice Recorder) in each of the areas of the building with reports or claims of paranormal activity; including the bar, lounge, ballroom and the women’s auxiliary room. Each team would take turns carrying and using a DVR for live EVP sessions. (1) IR camera was placed in the lounge, (2) were placed in the ballroom, (2) were placed in the bar (1) was placed in the in the hallway of our base. Also, each team carried along with them during their investigations one of the following: K2 Meter, EMF (Electro Magnetic Field) Meter or Laser Thermometer.

There have been two murders that have been confirmed at this location along with two past employees dyeing months after leaving their jobs. The murder of Donna Joyner happened on the ballroom floor at a dance. She was murdered by her husband in 1989. Another murder of a unnamed young lady happened during the 1950’s or 1960’s. Each murder was a grizzly knife attack that left two women dead and the post and community in shock.

There are many paranormal reports and claims at the post, sounds of moving metal chairs when no one was in the room, feelings of being lead to find artifacts hidden within the walls, claims of two different female disembody voices, one personal experience while the Air Force song was playing on the juke box, there were sightings of Confederate Soldiers in full gear and a dark shadow, also claims of an evil looking woman’s face. These sightings and experiences caused extreme emotional feelings of sadness and anxiety. Sounds of the bell located in the lounge area being rung with no one in the room, doors shutting on their own, bathroom located in the lounge area people have feelings of being extremely uncomfortable, unexplained sightings of a male standing on the landing, also unexplained rotten smells followed people around even after the room had been cleaned, sightings of General Howell upstairs, unexplained shadows around the exit sign and doorway, uneasy feelings located at the hot water heater room.

The Patton Crosswhite Post 6975 VFW was charted in 1946 and received the building from Southern Railroad in 1951. The building has been a canteen and a hospital for World War I veterans. Before Patton Crosswhite the VFW was known as Rebel Retreat. They were located in Virginia and moved to Tennessee due to alcohol being outlawed.

There are several different areas of the building including a Women Auxiliary Room where the women held their meetings and worked on the VFW scrapbooks. A meeting room upstairs that now contains mostly photographs of the post’s past history along with photos of celebrities, car shows, dances, fundraisers and of Senator Richard Nixon who visited Bristol TN in 1949 and the VFW Honor Guard procession during the Senators visit. Also upstairs was a designated room for very important members called the Royal Order of the Cooties. The building has several hidden passages used to hide gambling machines that were illegal at that time. Also hidden in the walls and passages they have found many artifacts and some that have not been identified to date.

The Grand Ball Room is also located on the main floor which was added in the late 1950’s. The room has been used for many special events and for entertainment. However, tragedy did occur in the 1950’s or 60’s when an unknown lady was killed by a stabbing and again in 1989 when Donna Joyner was knifed down by her husband.

Two very important men that helped shape and build the VFW to what it is today are Guy Richardson also known as Mr. VFW Mr. Richardson who later became the Mayor of Bristol TN, and Olan Unpower these men are known as the corner stone to the VFW.

At 10:55 p.m. while watching the camera monitors Jeff and I heard a noise like a gravel had been tossed and hit the main entrance door and floor behind us, Jeff turned on the lights in the room and we both investigated to try and find what had made the noise and to try and find the gravel or whatever the object was that we heard but after both of us looked around on the floor and behind all the furniture we could not find any object to explain what we had heard.

Photo evidence: There was no photographic evidence.

Note:  BDPS does not support the idea of orbs as evidence of the paranormal because most orbs can be explained away as dust, bugs, rain, mist, fog, etc. There are cases that the orbs we photograph seem to move with some type of intelligent intent. We post these photos because we feel that there needs to be more investigation into the Orb Phenomenon and we shouldn’t be so quick to dismiss this phenomenon without further investigation and explanation. So we show these photos in an attempt to add another piece to the puzzle and leave this decision up to you to accept or dismiss orbs as evidence. It is also my opinion to show all evidence so we all can learn from what might be an area of the paranormal that may be getting over looked by researchers.

We have come to the conclusion that the Patton Crosswhite Post 6975 VFW has very low paranormal activity in the forms of EVP’s and personal experiences that helped us to determine our conclusion.

I feel honored to be working with such a great team. Without the team’s hard work and professionalism BDPS would not be what it has become today.

I would like to thank all of the BDPS members for all their hard work. To all of our clients, a special ‘thank you’ for giving us the opportunity to be able to come in and help to the best of our abilities. I know with the team that I have formed we will have exciting investigations in the future. I would like to let everyone know that our members have become more to me than just investigators, they have become my family. Without them BDPS would not be possible. Just like a family we sometimes agree and sometimes we don’t agree but each and every member of BDPS is very special to me. Thanks guys, you all are the best!!!

I hope everyone enjoys the photos and the analysis sheet along with the new video we are providing. Also we will have our EVP’s, photos and any video evidence on the website for everyone to view and listen to. You can judge for yourself. If anyone has any questions or comments we would love to hear from you. Let us know what you think.