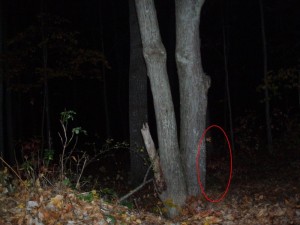 On October 18, 2008 the BDPS team investigated the Glenwood Recreation Park located at Princeton, West Virginia. All of the BDPS team members did an outstanding job with such a huge area to investigate. I would like to personally thank Greg Pruett Park Superintendant for giving BDPS permission to investigate the park. With Mr. Pruett’s help we were able to obtain a lot of history and knowledge of the historical importance of this area.  We started around 6:00 p.m. and finished our investigation until 12:30 a.m.

Equipment used at this site included (6) DVR’s, (2) Microcassette Recorders, (1) Camcorder, and (3) digital cameras. As we do in our investigations we placed the DVR’s in areas that were reported to have high paranormal activity. The camcorder was placed in an area that has had reports of ghostly entities walking along the paved pathway. The microcassette recorders where held by myself and Robyn. We were divided into two teams: team one myself and Mike Brown team two Robyn, John and Aaron. While we were investigating the park we were doing our EVP’s (electronic voice phenomenon).

While conducting our investigation a few team members and I had personal paranormal experiences. Robyn experienced having strong feelings of being watched and no one was in the area. She was also hearing whistling in the distance. Aaron explained to me that he didn’t hear the whistling but John said he heard whistling a couple of times when Robyn said she heard the whistling.

Mike was also having the feeling of being watched. I was having feelings like someone was following us and the times I would turn around to see if anyone was behind us there would be no one but I would always take a photo and got a bright orb about 75% of the time that was behind us. While in a large field on top of the mountain Mike and I split up and were about 50 to 100 yards apart and I conducted an EVP session where I was trying to provoke a response by saying “Are you a damn Yankee?” as soon as I said that Mike spoke up loudly to say he had heard a whistle and asked me did I hear it and I explained to him that I didn’t hear anything. So we went to the area where Mike heard the whistle and took more photos and did more EVP work but we did not get anything at that time.

We were able to obtain some of evidence of paranormal activity in the form of EVP’s (electronic voice phenomenon) with one of the microcassette recorders, photos containing orbs and a shadow, and one unexplained phenomenon that sounds like Mike and I were walking in a tunnel made of metal. What makes this phenomenon special is that we were walking a path in the woods where there are no tunnels and no metallic surfaces anywhere.

The investigation of this park was a success due to the fact that we got 7 EVP’s (electronic voice phenomenon). Out of these there are 3 that are very clear and loud. We also got photos of different sizes and different colored orbs, an unexplained shadow and the unexplained noise that occurred while Mike and I were walking on the path in the woods that sounded like a metallic tunnel, which lasted for 30 seconds.

6)       Loud whistling twice one right after another while we were taking a break under one of the shelters and none of us heard these whistles at the time this happened.

We have come to the conclusion that this park has a low rate of paranormal activity in the form of EVP’s and orb activity. Our hope is to one day to get permission to investigate this park again with more advanced equipment and more personnel to be able to cover the vastness of this recreation park.

This was our fifth investigation and it was a success. I feel very strongly that the Glenwood Recreation Park warrants further investigation to get more evidence of the paranormal that seems to exist there. We have been very fortunate to have captured such great evidence. I feel honored to have had the success we’ve had.

I look forward to our next investigation. If anyone would like for us to do a paranormal investigation of their home, business, church, property or a family cemetery. If you would just like to speak with us about any paranormal activity you may be having we would love to hear from you. No problem is too small. We would be honored to help and we do not charge for our services. Contact BDPS to set up a time and place for us to discuss your paranormal questions and or problems.

I feel honored to be working with such a great team. Without the team’s hard work and professionalism BDPS would not be what it has become today. BDPS is proud to introduce our newest member Mike Brown. He is a Law Enforcement Officer. With his expertise dealing with the public and his eye for details along with technical knowledge with surveillance equipment Mike is an asset to our team. We look forward to working with Mike and the experiences and knowledge he brings to BDPS. With Mike’s commitment to helping BDPS in finding evidence to support the existence of the paranormal may allow us to come one step closer to explaining the paranormal phanamenon.

I hope you everyone enjoys the photos and the analysis sheet along with the new video we are providing. In the future we will have a web-site that will be listing all the information that I have been providing. Also we will have our EVP’s and any video evidence on the site for everyone to view and listen to. You can judge it for yourself. If anyone has any questions or comments we would love to hear from you. Let us know what you think.