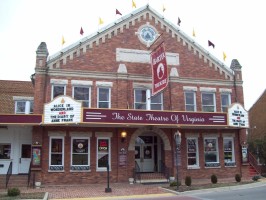 "We are the light that cuts the darkness. Therefore, when you see... truth must be honored."

On October 24, 2009 the BDPS team investigated the Historical Barter Theatre located in Washington County in the town of Abington, Virginia. I would like to take this moment to thank Master Electricians Josh Wilson, Ken Cornett, cast and members of the Barter Theatre for giving us permission to investigate such a beautiful and historical site. We decided to use three teams to investigate this site. The first team consisted of Tina, Jason and me. The second team consisted of Aaron, Amy and special guest Rachel. The third team consisted of Mike and Nicole. We switched Jason and Nicole with different teams to help with their training. We started our investigation around 1:00 a.m. and finished around 5:45 a.m.

We started the investigation by dividing the theatre into three sections. First rotation started with Team One, including Tina, Jason and myself. We began by investigating the upper theatre area which consisted of the balcony, balcony lobby, and auditorium and stage and back stage of the theatre. Team Two included Aaron, Amy and Rachel started their investigation in the basement that included the actor's dressing room, actor's break room. Team Three was Mike and Nicole. They started in the tunnel and Scary Room, which is located, adjoined to the basement. Each team worked on a rotation. About every two hours each team would rotate to the area of the last team that was investigating. A few times during the investigation we also switched up team members. This was a great experience for the entire team to be investigating such a large area along with new members. This was a huge experience and very helpful in our training of the new investigators.

History: The Barter Theatre began on June 10, 1933 by Mr. Porterfield, a native young actor from southwest Virginia. Originally constructed in 1831 as a new location for Sinking Springs Presbyterian Church, the first production event was "the Virginian" on June 14, 1876. In 1890 the title was transferred to the town of Abingdon by the Sons of Temperance so it could serve as a town hall also used to be a Fire Hall. During the Civil War, the Martha Washington Inn was used as a Confederate Hospital.  Since the Union would not attack hospitals, the confederates dug a secret tunnel to the Barter Theatre where they also stored ammunition.  The Union secretly knew of the tunnel and shot two of the confederates.

Reports & Claims: It has been reported that their spirits still haunt the Barter.  Other claims are that the tunnel collapsed. After the renovation of the Theatre, the apparition of Robert Porterfield has been spotted on stage and in the balcony which was his favorite place to sit during plays.  It is also reported that prop scenery has said to have moved at night. There have been reports of the sounds of clapping and disembody voices being heard in the auditorium, dressing rooms and basement

Tina: While investigating the auditorium I was sitting beside one of the DVR's that was placed earlier by Rodney on a chair arm middle way of the auditorium. I started to do an EVP session and I used one of the techniques that we use during our investigations by knocking on something in hopes of a response. I asked the question "Can you knock back?" I presided to knock 4 times and I got one knock back in response to my knocking. I asked Rodney who was investigating in the balcony and did he hear it. He replied he did not. Later while Rodney was going over all of the recordings, he found the knock that had responded to my knocking and he got this evidence on 3 different DVR's that were placed on the stage, auditorium where I was sitting and the one in the balcony where he was investigating.

Note:  BDPS does not support the idea of orbs as evidence of the paranormal because most orbs can be explained away as dust, bugs, rain, mist, fog etc. There are cases that the orbs we photograph seem to move with some type of intelligent intent. We post these photos because we feel that there needs to be more investigation into the Orb Phenomenon and we shouldn't be so quick to dismiss this phenomenon without further investigation and explanation. So we show these photos in an attempt to add another piece to the puzzle and leave this decision up to you to accept or dismiss orbs as evidence. It is also my opinion to show all evidence so we all can learn from what might be an area of the paranormal that may be getting over looked by researchers.

Childs voice "This is fun"

Female voice "I know you (un-auditable mumbling) over here"

***Note: These EVP's happened within seconds of each other because Tina and I were investigating the Actors Break Room when Tina heard a heavy breath and asked me did I hear it and I told her no and I thought it might have been Jason. We were debating if it was Jason or not. I even called the other Team leaders to get a location of Jason and he was on the other side of the building with Team 2 at the time of this event.

Un-auditable child's voice along with a Male voice whispering "Rodney"

Male voice whispering "I got to check the tapes."

Musical note from a piano **Note: there was no piano

We have come to the conclusion that the Barter Theatre has moderate paranormal activity. We look forward to one day coming back to investigate such a great historical site with more advanced equipment. This was our seventeenth investigation and it was a great success. We have been very fortunate to have had the opportunity to be working with such a historical site as Barter Theatre. I feel honored to have had the success we've had and to be working alongside such a professional team.

I feel honored to be working with such a great team. Without the team's hard work and professionalism BDPS would not be what it has become today.

Other News: Robyn Belcher is taking a leave of absence until further notice but hopes to be returning soon.

Shawn Hamlin is taking a leave of absence until further notice.

Amy Flick has become an Honorary Member of BDPS

Like to take this moment to wish Tina Kwun and Amy Flick a very Happy Birthday!!

This will be our last investigation of 2009 and I would like to thank all of the BDPS members for all their hard work. To all of our clients a special ‘thank you' for giving us the opportunity to be able to come in and help to the best of our abilities. We look forward to 2010. I know with the team that I have formed we will have exciting investigations in the future. I would like to let everyone know that our members have become more to me than just investigators, they have become my family. Without them BDPS would not be possible. Just like a family we sometimes agree and sometimes we don't agree but each and every member of BDPS is very special to me. Thanks guys you kick ass!!!

I hope everyone enjoys the photos and the analysis sheet along with the new video we are providing. Also we will have our EVP's, photos and any video evidence on the site for everyone to view and listen to. You can judge it for yourself. If anyone has any questions or comments we would love to hear from you. Let us know what you think.