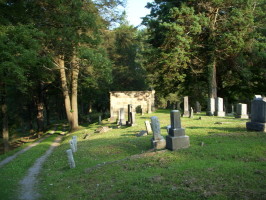 "We are the light that cuts the darkness. Therefore, when you see... truth must be honored."

Equipment used at this site included (6) DVR's (Digital Voice Recorders), (3) Microcassette Recorders, (2) Camcorders with night vision, (5) digital cameras, (1) K2 Meter, (1) EMF Meter and (1) Laser Thermometer along with other devices for experiments. We tried to recreate the set up as we did in our last investigation of this cemetery to try and get a response from the child EVP's (electronic voice phenomena) by using toys that light up and that play music. As we try to do in all of our investigations, we placed the DVR's in areas that have reports of paranormal activity or areas of interest. With the knowledge from our last investigation this helped in the placing of our equipment in hopes of getting evidence. Both night vision camcorders were placed on the top area of the cemetery facing one another in attempts to capture any video evidence. The microcassette recorders were held by each team as they investigated the cemetery.

Robyn Belcher: About 45 minutes into the investigation me and Rodney were sitting and talking. During this a cold hand touched my shoulder. When we made our way to the top of the hill we were setting and resting and I heard a female whisper "Rodney". Later me and Rodney and Aaron took the top center of the cemetery. Close to the camera farthest down we sat to watch for shadows that several others had seen. After a few minutes we all saw a shadow the size of a child peeking in and out of several headstones and a tree almost like it was playing with us. At the same time Aaron had been hearing noises behind us in the road. I caught several blue orbs during him hearing this. A few minutes later I turned to my left and a blue face was right in front of mine just for a ½ a second. This was the first time I felt uneasy that night. The second was when Mike and I went back to see if he could see the child shadow playing. At first we heard what sounded like footsteps in a few isolated areas then all at once it was everywhere.

Amy Flick: At one point Aaron and I kept smelling flowers. Or maybe some kind of cheap perfume! We searched for flowers but didn't find anything that would cause the smell. I did feel like somebody was following me around all night long. Every time I turned around to take a picture I got the same green orb. I did witness the little boy/girl playing hide and seek or just watching us from behind the tombstones. Only saw him twice though. I got cold chills. I do not think from his presence though just because it was pretty neat.

Mike Brown: While investigating the upper area with Johnny, we were talking about the miners and masons that were buried there. While speaking to Johnny, I saw a shadow move from one headstone to behind a tree. Once again in this area there was a general creepy feeling. While investigating the location behind the tree, Johnny explained that was the same general area where we captured the "I Push It" EVP.

Rodney Shortridge: While investigating the lower end of the cemetery with Robyn I heard my name "Rodney" whispered. I asked Robyn was that you and she said no and that she heard it to. After rotating and also changing some of the team members with other members Robyn, Aaron and I were investigating the center top of the cemetery and we were sitting close to the road. With all the flash lights off and while Robyn was taking pictures to our backs, I saw a shadow when the flash went off. It moved from one headstone to another one. The shadow was short like a child. I asked Robyn and Aaron to watch in the direction that I saw the shadow and with lights off and no flashing from the cameras. A few minutes passed and then from behind a tree the shadow moved to another headstone and then to another one. Robyn and Aaron agreed they saw what I was seeing. I felt a little chill in the air but not much. After watching the shadow move from one headstone to another for about 15 minutes and asking questions to try to get a response we investigated the area where the shadow was moving back and forth. We tried to find out what could have been causing this event and we could not find anything to explain what we saw. It is my conclusion this was a shadow of a small child we were seeing. We took pictures of the event and nothing conclusive came of them.

Photo evidence: shows an apparition of a small child sitting between a tree and headstone, where we saw the shadow later that night.

We have come to the conclusion that the Pocahontas Cemetery still has high paranormal activity. But, on this night the activity was very low compared to our previous investigation in September of 2008. This may have been due to the fact that there was a celebration going on in the Town of Pocahontas on this night that was less than a mile from the cemetery. We heard the party noises ourselves for several hours. Could this have had an effect on the activity in the cemetery? Possibly. There is no way of testing this theory. We look forward to coming back in the spring of 2010 to investigate this historical site with more advanced equipment. This was our fifteenth investigation and it was a great success. We have been very fortunate to have had the opportunity to be working with such a historical town as Pocahontas, Virginia and with Amy Flick. I feel honored to have had the success we've had and to be working alongside such a professional team.

I feel honored to be working with such a great team. Without the team's hard work and professionalism BDPS would not be what it has become today.

I hope everyone enjoys the photos and the analysis sheet along with the new video we are providing. Also we will have our EVP's, photos and any video evidence on the site for everyone to view and listen to. You can judge it for yourself. If anyone has any questions or comments we would love to hear from you. Let us know what you think.