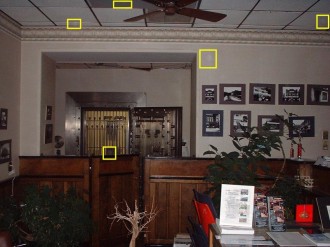 On July 18, 2009 the BDPS team investigated the Pocahontas Town Hall located in Tazewell County in the town of Pocahontas, Virginia. I would like to take this moment to thank Amy Flick and Mayor Adam Cannoy for contacting BDPS and giving us permission to investigate such a historical site. I decided to use one team to investigate this site. This team included Mike Brown, Amy Flick and me. We started our investigation around 9:00 p.m. and finished around 2:15 a.m.

The Pocahontas Town Hall was first used as the Bank of Pocahontas. It is rumored that the president of the bank committed suicide in the bank; apparently he may have lived in the apartment above the Town Hall.

Amy Flick: While taking pictures in the corner I kept getting a light reflection on the pictures I was taking. I’m not sure what it was, but I am convinced it was something. While again taking pictures, Mike Brown had gone to the back room, Rodney and I both heard something crash. We were in the front of the building at that time. I thought he had tripped over something, so we teased him. Then he came out wanting to know what we were talking about! It was a half door that goes to the back offices had slammed up against the wall! For some reason we still didn’t feel like we were getting anything. After a bit we were ready to pack things up and head home when one of the monitors started going off! We all walked over there. Mike went and got a video recorder and set it on the ledge. Rodney and Mike were trying their best to debunk what was happening. They couldn’t on this occasion. Mike held the monitor in his hand and asked if something was there. Maybe he set it on the ledge. I’m not sure of this. He asked if somebody was there if they could step away from the monitor to prove to him that someone or something was there. Apparently it stepped away because the monitor went normal. Right before this event it was so freezing cold in that area. I had goose bumps all over my arms. So did Rodney and Mike. Mike asked whatever it was if they could move closer to the monitor and apparently it did because the monitor lit up again. At one point it also got clammy in the area. I also heard a lady or a girl laughing at that time. Actually, we all did at the same time. Coming from the police department direction, we also noticed at that time the police department door was barely opened. When we first came in the first thing I did was walk back there to shut this door because we were not allowed in that area. After all of this happened we took a break outside for a few minutes then came back in to find that each picture we took was darker than before. I’m not sure what caused this.

Mike Brown: While investigating the back of the building, in front of the large safe, I was getting some really crazy EMF (Electro Magnetic Field) readings. The hair on my arms stood up, and just a creepy feeling. This was experienced by Rodney and Amy. While attempting to locate the source of the EMF readings, I ask “If you are here with me, please step away from me and then back again”. Sure enough, the lights on the K2 meter went out one at a time, and then light back up one at a time, just as if someone stepped away and stepped back. This was witnessed by Amy. Shortly afterwards, all three of us heard what sounded like a female giggle.

Rodney Shortridge: We were getting ready to wrap it up for the night and I was walking toward the back of the building toward the safe. There is a half wall and half door that separate the front lobby and the back area of the building. Before we start each investigation, especially in a building or home, we always sweep the area trying to find the hot spots that would cause our K-2 meter and EMF meter to receive any readings such as all electronic equipment, over head lights, wall outlets anything that has electricity. This will give us a base line as to any EMF or K-2 readings while working the investigation. The reason we to this so if anyone has any EMF or K-2 readings during the investigation we keep in mind where all the electronics and all electrical supplies are so we don’t report any false readings that could and can be explained. As I got closer to the half door my EMF meter started to spike and as I got closer to the door the higher the spike. I did a sweep toward the half door and half wall and I got a constant spike around 4 on the EMF meter and a few times it spiked off the scale of the meter. I noticed Mike Brown was near on the other side of the wall and I asked him did he have the K-2 meter and he said yes. I explained to him what was happening on the side of the wall that I was on and asked him to check the back side of the wall to see if he was getting any readings. Mike explained to me that the K-2 meter was going off also the closer he got to the wall and he was also getting high readings on the K-2 meter. Earlier, before we started, Mike and myself took EMF readings in this area and got nothing and plus there is no electronic equipment in this area along with no electrical outlets or switches so the explanation for the sudden spikes on the EMF meter and the K-2 meter are still a mystery. Mike, Amy and I searched for about an hour trying to find the source of these high readings and could not find an explanation or source. While searching for the source of the high readings, there was a clammy cold feeling in the air along with a feeling of dread in the area we were investigating. All three of us at the same time were experiencing goose bumps and the hair on all of our arms was standing on end. This was an amazing feeling. I had never experienced anything like that before and I have no explanation for what was happening unless there was some type of entity or entities that were trying to communicate with us. We went outside to take a break and when we got back we were still getting some EMF and K-2 readings but they were very faint and finally gone. I have no explanation for this event. I’m just grateful I had the opportunity to experience this with two of my friends and teammates.

This was a great experience for the team to be investigating such a small area. Each one of us had some personal paranormal experiences during this investigation such as hearing knocking, sliding, footsteps, cold clammy spots, hair standing up on our arms for no reason and we all three heard a small child laugh.  In the area near the bank safe, the K-2 meter along with the EMF (electro magnetic field) detector, kept giving us high EMF readings in an area about 2’ wide x 6’ long and about 3’ off the floor. We checked all electrical outlets, and all power sources to see if this disturbance may have been caused by any other power source. We were unable to find any type of power source that would have caused such high readings. We could not explain this experience or find any explanation. Note: before each investigation we take the EMF meter and the K-2 meter and do a sweep of the building to find all areas that have EMF readings and note them down so we have a grid to compare any and all strange EMF readings. This event is still a mystery.

Talk to her dad

We have come to the conclusion that this property has low paranormal activity in the form of EVP’s disembodied voices, unexplained noises and orb activity. Our hope is to one day come back to investigate this historical site with more advanced equipment. This was our thirteenth investigation and it was a great success. We have been very fortunate to have had the opportunity to be working with such a historical town as Pocahontas, Virginia and with Amy Flick, Tom Childress and Mayor Adam Cannoy. I feel honored to have had the success we’ve had and to be working alongside such a professional team.

I would also like to thank William Paine and all the great folks at Adventure Radio for their support.

I feel honored to be working with such a great team. Without the team’s hard work and professionalism BDPS would not be what it has become today.

I hope everyone enjoys the photos and the analysis sheet along with the new video we are providing. Also we will have our EVP’s and any video evidence on the site for everyone to view and listen to. You can judge it for yourself. If anyone has any questions or comments we would love to hear from you. Let us know what you think.