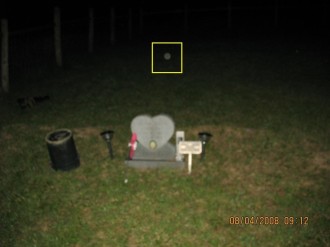 August 4, 2008 at the Johnson - Shortridge Cemetery located in North Tazewell on the hill behind Earnie and Margie Johnson’s home. I and Robyn Belcher started our paranormal investigation at 7:00 p.m. We first started by placing the Digital Voice Recorders on two of the gravesites. I placed the Olympus Digital Voice Recorder on top of my father Verlin Shortridge head stone and started the recorder, while Robyn placed the Sony Digital Voice Recorder on top of Earnie Johnson’s gravesite, which is about 20 feet from my father’s gravesite. Robyn and I then set up the Camcorder near Amanda Johnson’s gravesite, which is about 10 to 15 feet from Earnie Johnson’s gravesite so we could have a view of all three graves. While waiting for Allen Gross, the digital voice recorders plus the camcorder picked up disembodied voices. Most of these EVP’s are very clear such as a voice saying “Bucket”(male voice), “Shew”(male voice), “Hey Rod”(male voice), “No”(male voice), “Hmmm”, “Yeah”(male voice), a sound of a baby grunt, a growl, “Hills”(male voice), “I got one”(male voice), “I gotcha one backup”(male voice). Not only were these voices picked up on the digital voice recorders but a few where also picked up on the microcassette recorders that I, Robyn and Allen where using to do our EVP work. Before we started doing any EVP work we took pictures. Only one picture has a questionable orb in it and it was taken by me using a digital camera of the sky. The orb looks like a skull. Robyn stated that the digital voice recorder that she had set up at Earnie Johnson’s grave had moved about 6 inches. Allen and I stated that we had not touched the recorder. So was this the work of the paranormal? I determined this to be inconclusive because no one witnessed the event. Within a couple of hours I was sitting at my dad’s grave, Allen was sitting at Ernie’s grave and Robyn was sitting at Amanda’s, about 10 minutes had passed when Robyn was explaining that she felt something cold touch her neck and that she felt really cold on her left side, the side that was facing Amanda’s headstone. Allen decided we should do our EVP work first at Amanda’s grave due to the strong feelings that Robyn was showing and having towards Amanda’s grave. While doing our EVP’s at Amanda’s grave, I also was feeling coldness on my right side. There was no breeze and the feeling of coldness could not be explained even with Allen using a laser thermometer. The laser thermometer did show a 10 degree temperature drop from 72 degrees to 62 degrees. I feel this event is also inconclusive due to the lack of evidence but I must note there had to be a reason for the temperature change that we couldn’t explain. It is to be noted that my father’s grave and Amanda’s grave have solar lights that I had placed near their graves a few weeks ago. The night before our investigation I was traveling past the graveyard and noticed that all the solar lights in the graveyard were on but this night dad’s and Amanda’s lights were not on. This may have been a problem with the lights or something paranormal but I feel this is also inconclusive due to the lack of evidence. Allen brought with him a K2 meter that shows the presence of electromagnetic fields and radiation levels. This device has a LED Display with lights that show when there is a presence of different changes in the fields. Robyn noticed the LED Display changing colors twice, once at my father’s grave and once at Amanda’s grave. There is no reason for the K2 meter to have picked up any electromagnetic fields due to the fact there are no power lines within a 1,000 feet or more and the equipment we were using was all battery powered. There was no electricity of any kind in the area. Also, the camcorder evidence, I had placed the K2 meter at Amanda’s grave when we were doing our EVP work. This is when Robyn was feeling the coldness on her body. The camcorder evidence showed the K2 meter LED lights go complete out and within a few seconds come on again. I have no explanation for how or why this happened to the K2 meter. With this evidence I have to say this is also inconclusive. While doing EVP work at my father’s grave, Allen jumps up and explains to us that he has had a cold hand grab the back of his neck. He is adamant that he has been touched by something spiritual. Maybe by my father? Robyn and I had taken pictures of Allen when this event happened. Upon review of the pictures there was nothing to show any type of presence, orbs or anything to explain what had touched Allen. It must be noted that on the microcassette recorders we got EVP’s saying “I wouldn’t tell” (male voice), “Amanda” (female voice), “No”(male voice) and “Rodney”(male voice). The strongest evidence of any paranormal activity is the EVP’s that we recorded on several different devices placed in different areas of the graveyard. We got 14 different EVP’s that night. It is my opinion that there is high paranormal activity going on in the Johnson - Shortridge Cemetery in the form of EVP’s (electronic voice phenomena); I look forward to taking the BDPS team back to the Johnson - Shortridge Cemetery in the near future.